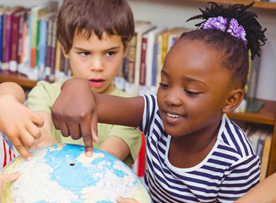 As part of the four-phase Bosnia Autism Project, SPG: CSI sent specialized teams of professional volunteers to provide evidence-based assessment and treatment education to professionals, university students and parents in Bosnia and Herzegovina.

In 2012, a team of 15 American professionals traveled to Zenica, Sarajevo, and Lukavac to provide advanced classroom training to over 60 students and almost 70 professionals in existing programs.

In 2013, in an effort to maximize our efforts, SPG: CSI invited three key professionals to train in California for three weeks. These trailblazing pioneers received advanced training in communication assessment and treatment strategies for children of all ages and stages and have since then gone on to provide trainings throughout Bosnia and develop policies and procedural guidelines for assessment and treatment of special needs.

In 2015 and beyond, SPG:CSI will continue with the final maintenance phase of the Bosnian Autism Project by providing support through continued education via web-based training modules.

See Our Mission for more information on future goals.